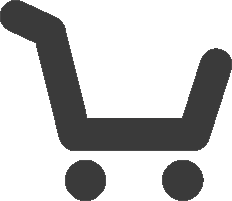 This debate is older than the internet and there are always opposing views out there. At the end of the day, determining what truck company is the best is subjective.

If you grew up with Dad who drove and swore by Ford, then you’re probably a Ford person. Or if your Dad was too brand loyal to Chevy, then that’s what you were destined to drive too. The same concept applies to Ram and Toyota trucks. That’s the reality across the board between every truck company.

However, there are some clear lines that help rank which companies make the best trucks in terms of power/towing capacity, looks, reliability, MPG, and price. Let's dig up the truth of this hot and heavy question. 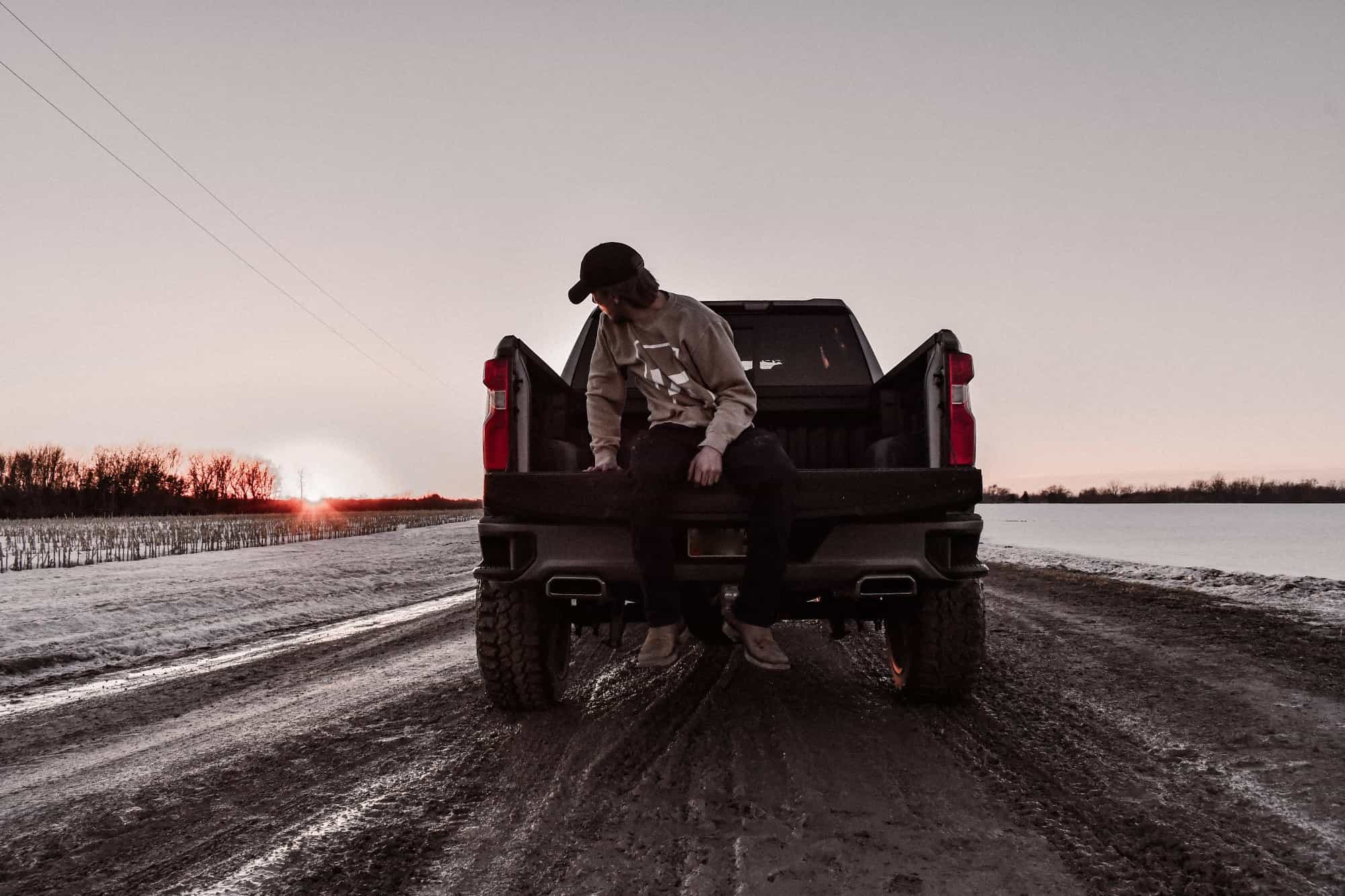 Ford Motor Company or Ford, has continued to be one of the leading companies in the full-sized pickup truck market. Their rich history has influenced the automotive industry, not to mention the manufacturing and industrial industries. 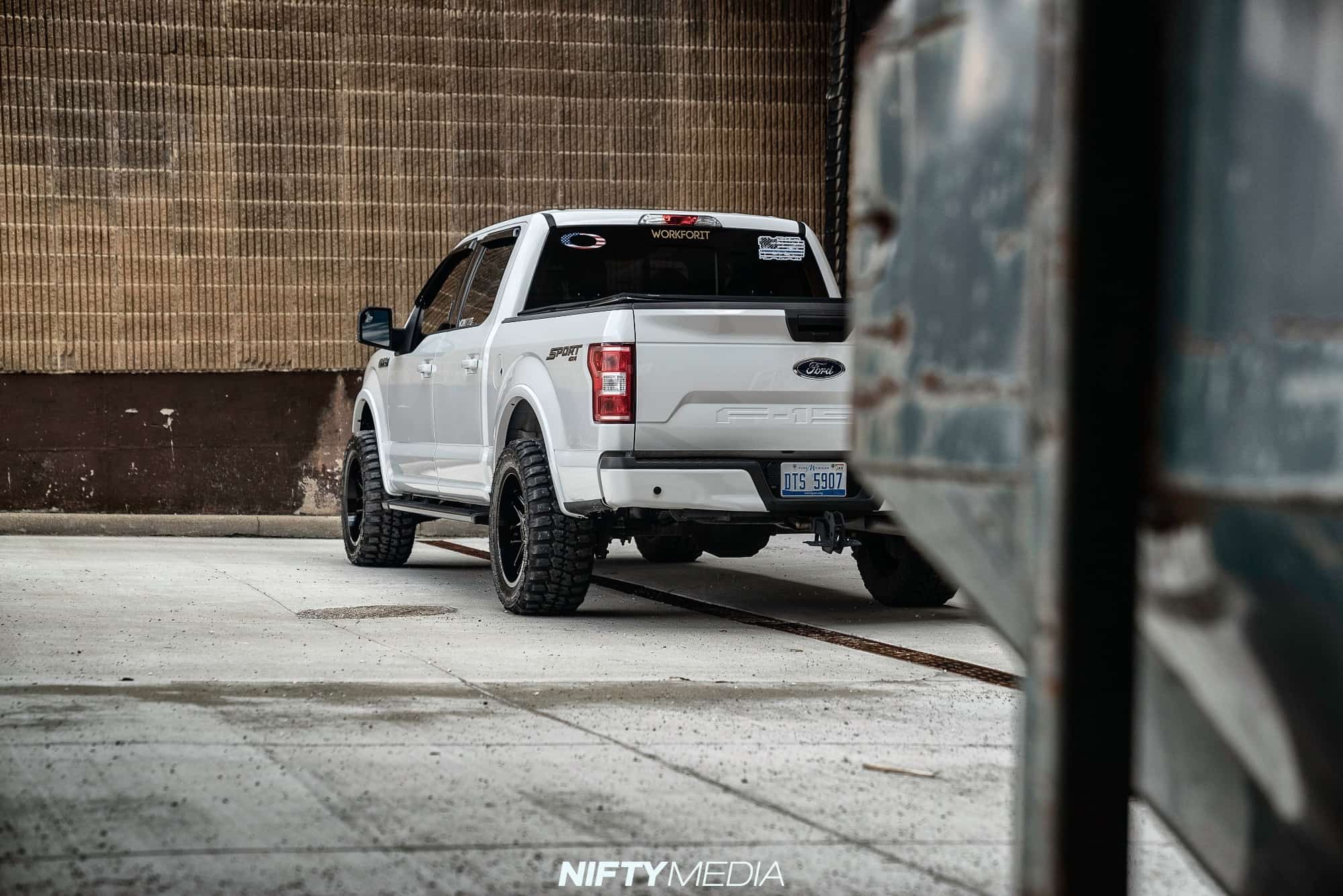 Not only did Henry Ford establish the standard for automakers and manufacturing companies, but he also influenced American business and ultimately the American lifestyle; The American dream was Ford’s dream. 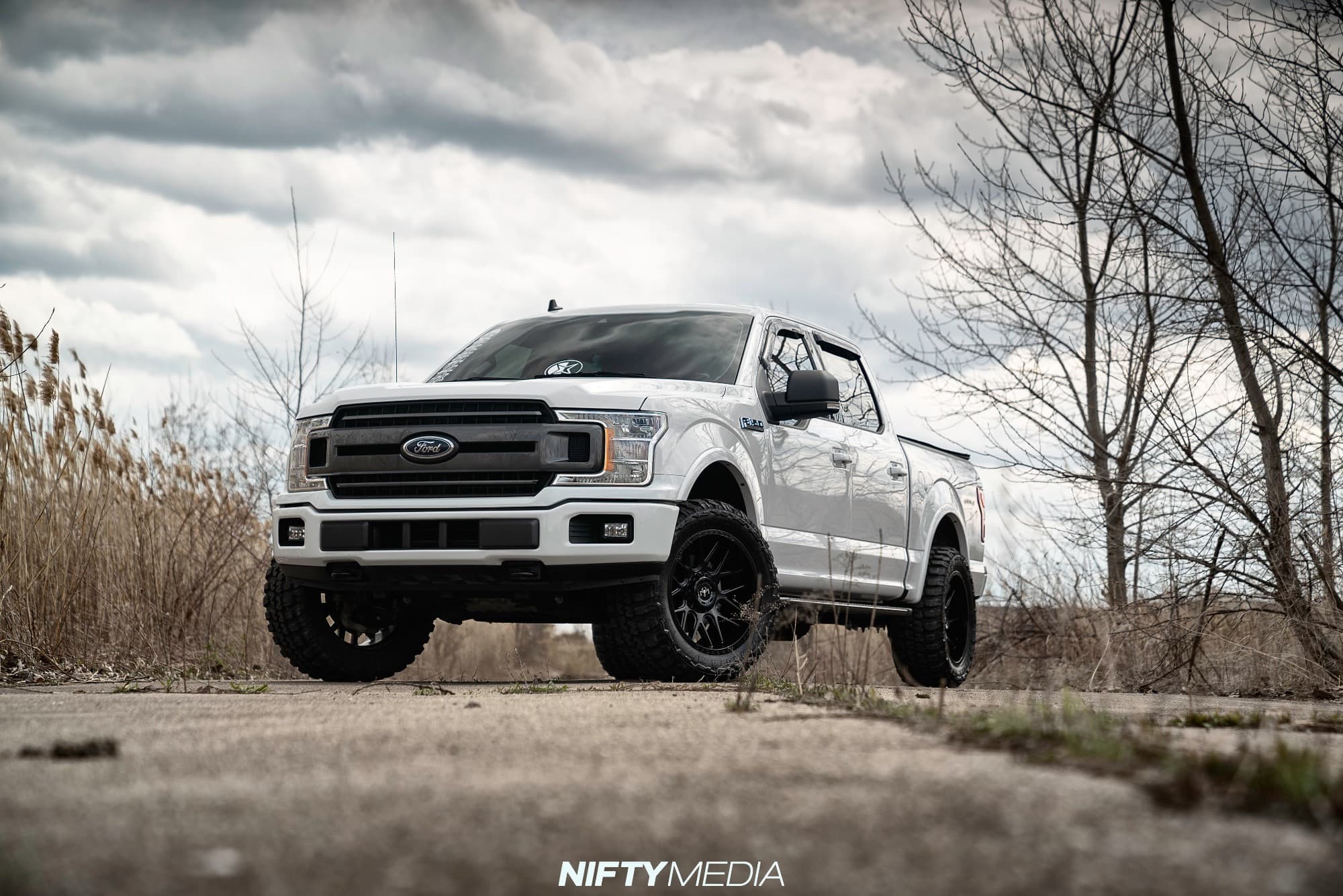 Their F-series has dominated the industry for decades and for good reason.

The first generation of the F series was released in 1948 and since has become the best-selling pickup truck in the US. Currently, there are 14 generations of the F series with a few special models like the SVT/Raptor, Platinum, and King Ranch for example. 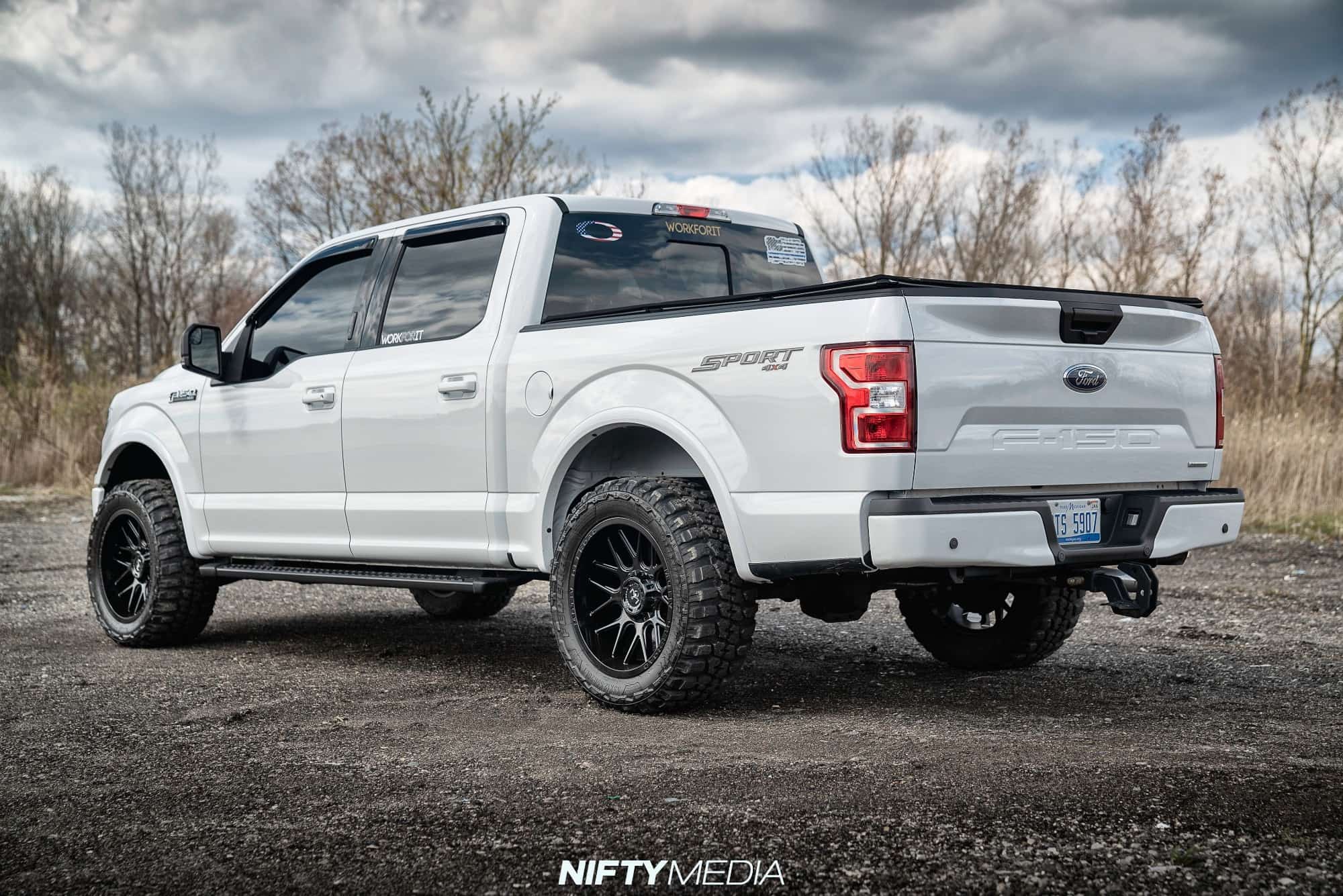 With the F-series dominating the industry for so long, it would be easy to say that Ford makes the best trucks. The F-series represents the hard-working American that values life, liberty, and the pursuit of happiness. It's the stay up late working, blood sweat, and tears mentality. I mean, their annual sales surpass those of Chevrolet year over year. It makes sense, right?

READ: IS IT SAFE TO LIFE MY TRUCK? 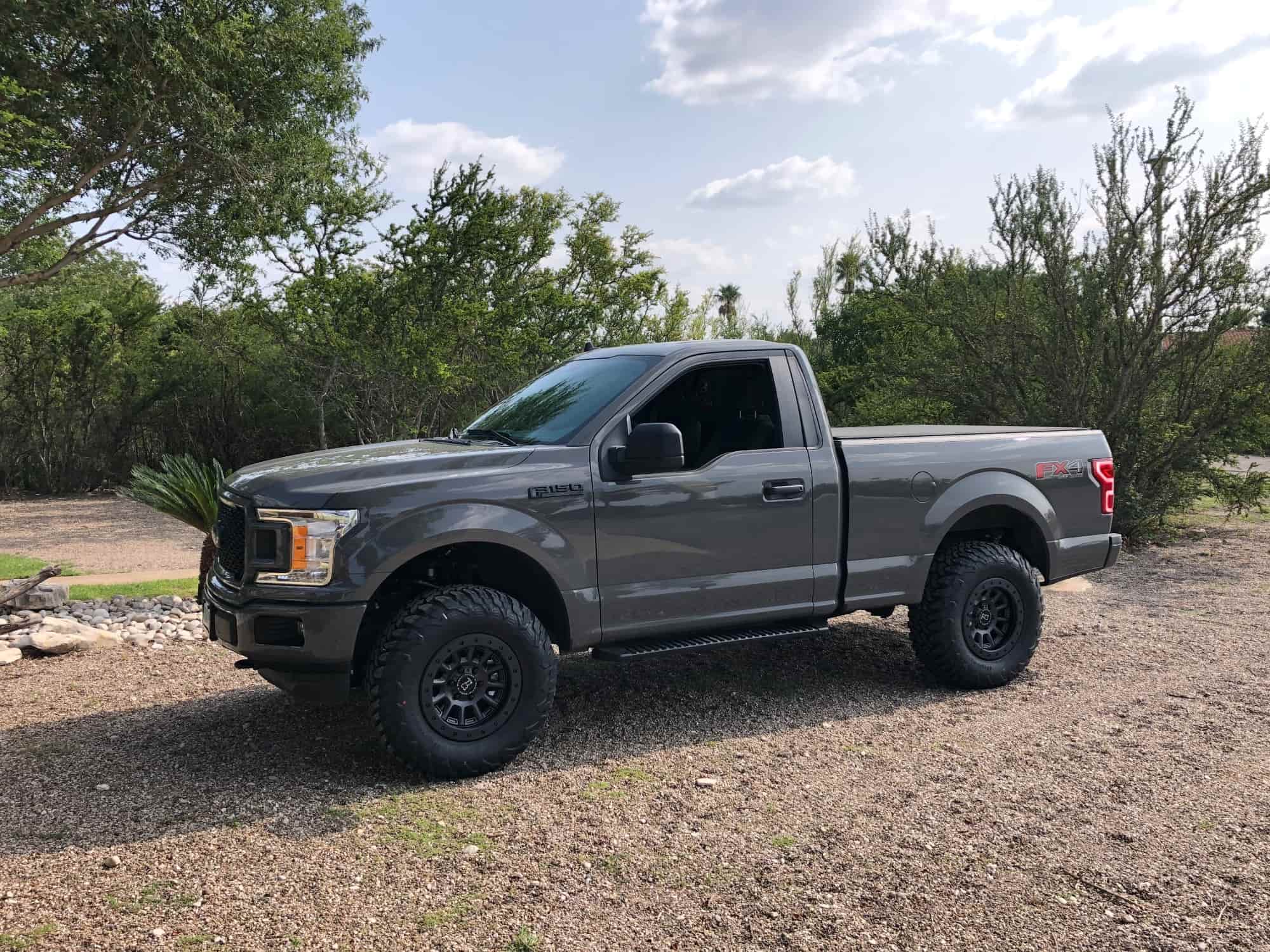 The F-series has continually been rated the best pickup truck on the market today. However, the F-150 is notorious for issues like master cylinder failure, swollen and stuck lug nuts, door latch failure for example.

The swollen lug nut issues were apparently due to the lug nuts having a steel core with either an aluminum, chrome, or stainless steel cap to match the wheels. Due to temperature and pressure changes, this style of lug nut can often swell up causing difficulting in removing them when it comes time to change anything related to your wheels, tires, or suspension. 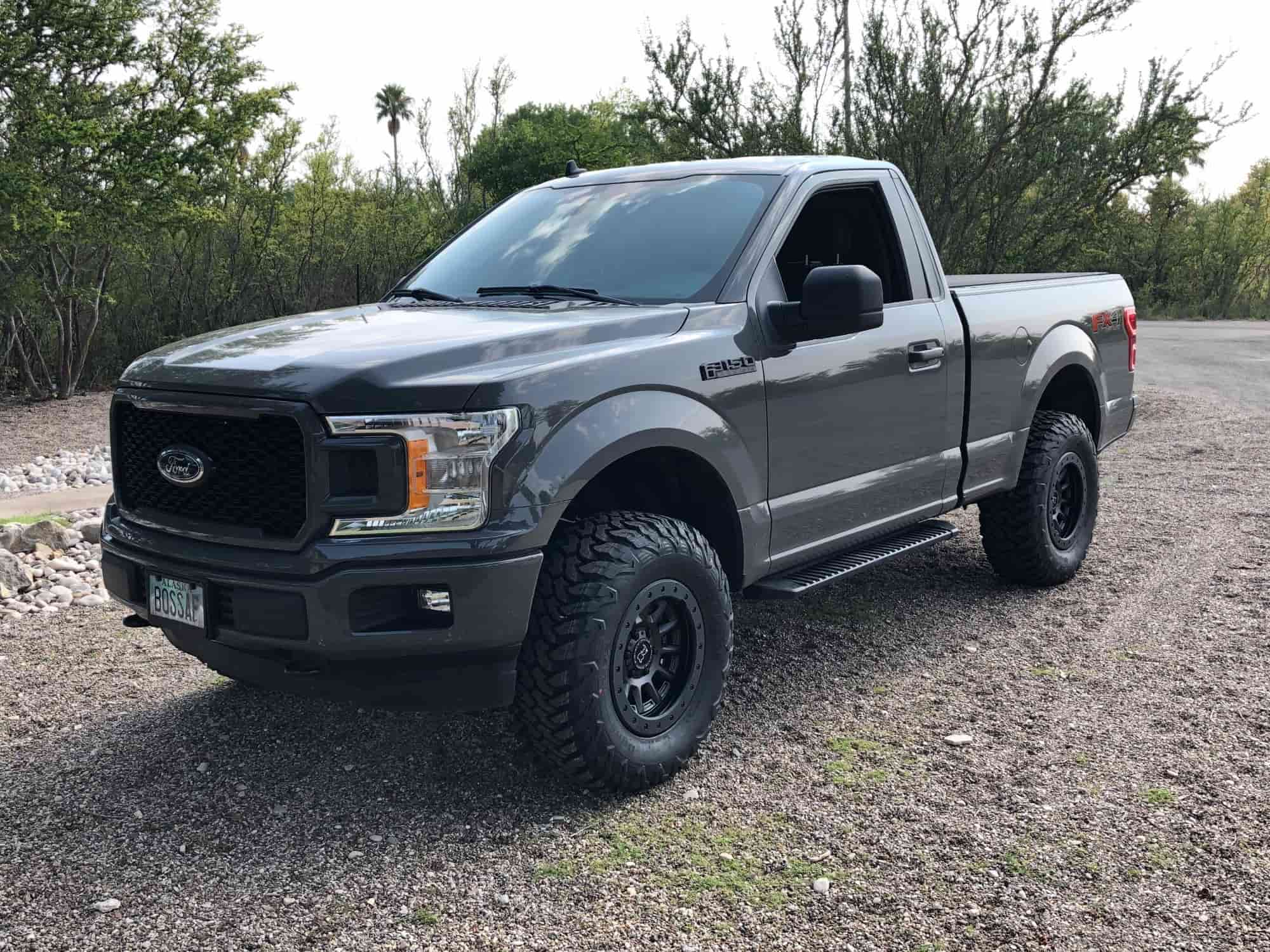 The Triton V8 engine found in the 11th generation of the F-series has also failed one too many people. The spark plugs have a tendency to eject from the heads or if you're lucky, get stuck in the heads. Who would have thought you could experience both ends of the spectrum? 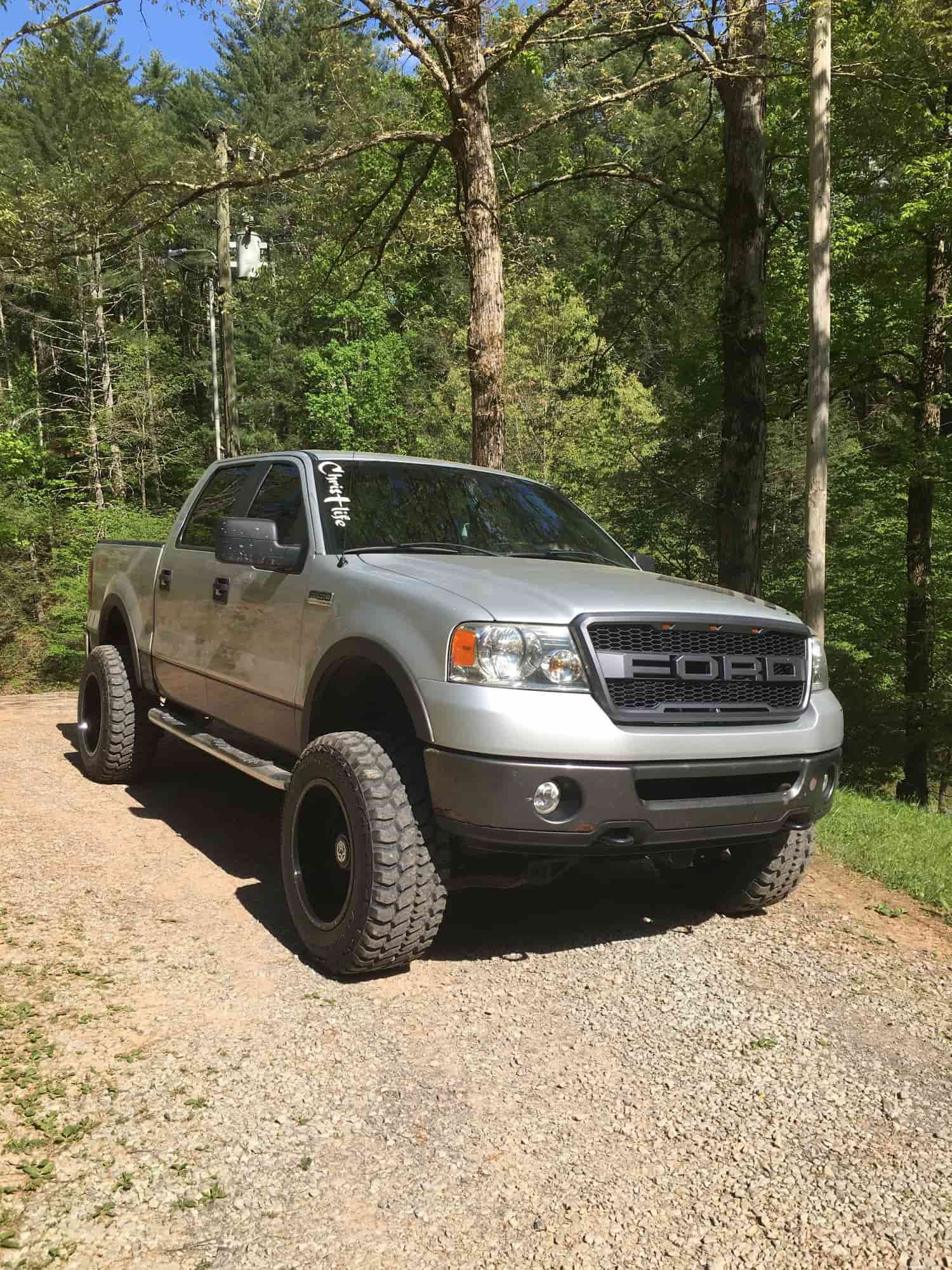 The F-150 has up to 430 horsepower under the hood along with a max towing capacity of 14,000lbs and a city MPG of 25 city and 26 highway. The interior is pretty spacious and is equipped with the latest automotive technology and amenities like the lane-keeping system, adaptive cruise control, Pro Trailer Backup Assist, as well as up to an 8-inch display.

The exterior has stayed true to the F-150 design roots with a large front grille with a square-like aluminum body, but they have grown to become more aggressive looking than ever before. 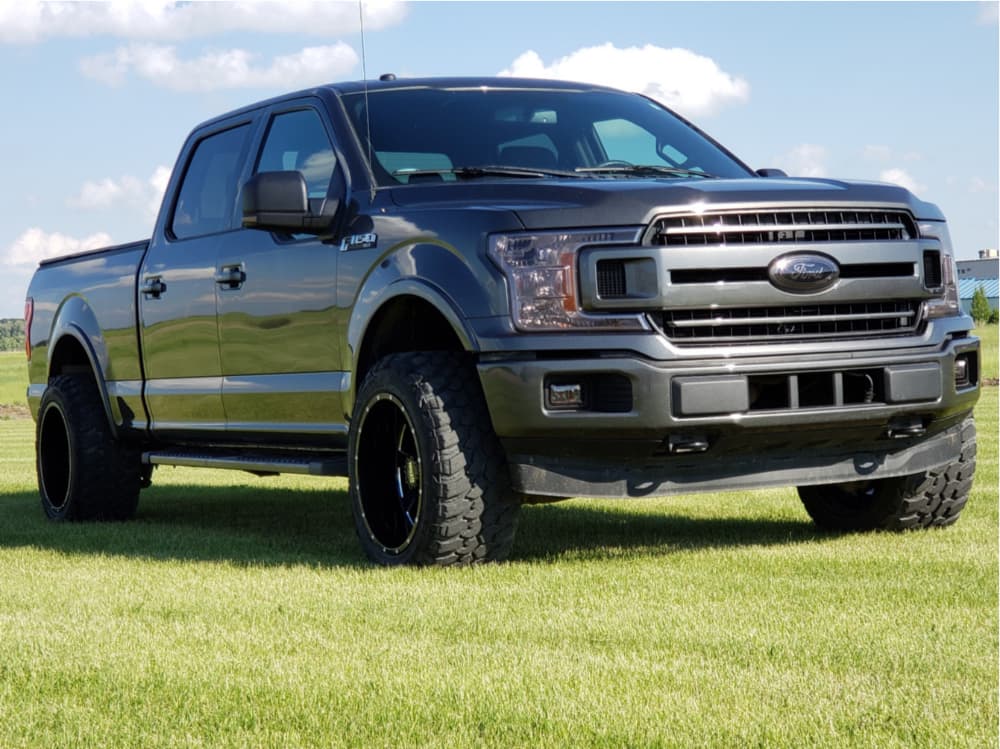 Chevrolet is another truck company that has continued to make an impression for truck enthusiasts. For some, Chevy will always stay near and dear to their hearts, but there’s plenty of beef with Chevy, mainly with Ford owners as we know. 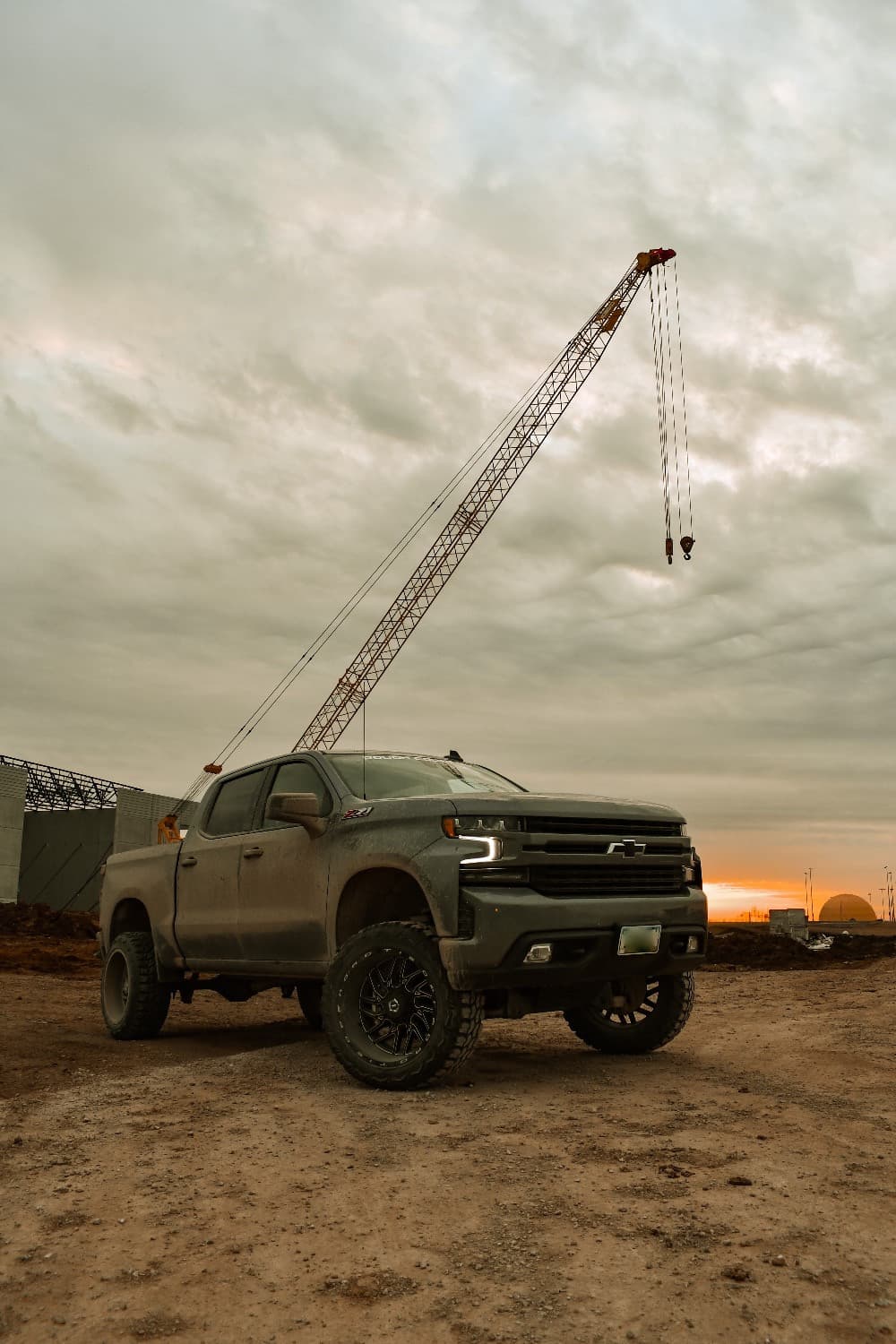 The F-150s and Silverados share a lot of similar features and power figures, but the Chevy Silverado does have some noticeable differences.

READ: WHAT WHEELS FIT A SIILVERADO 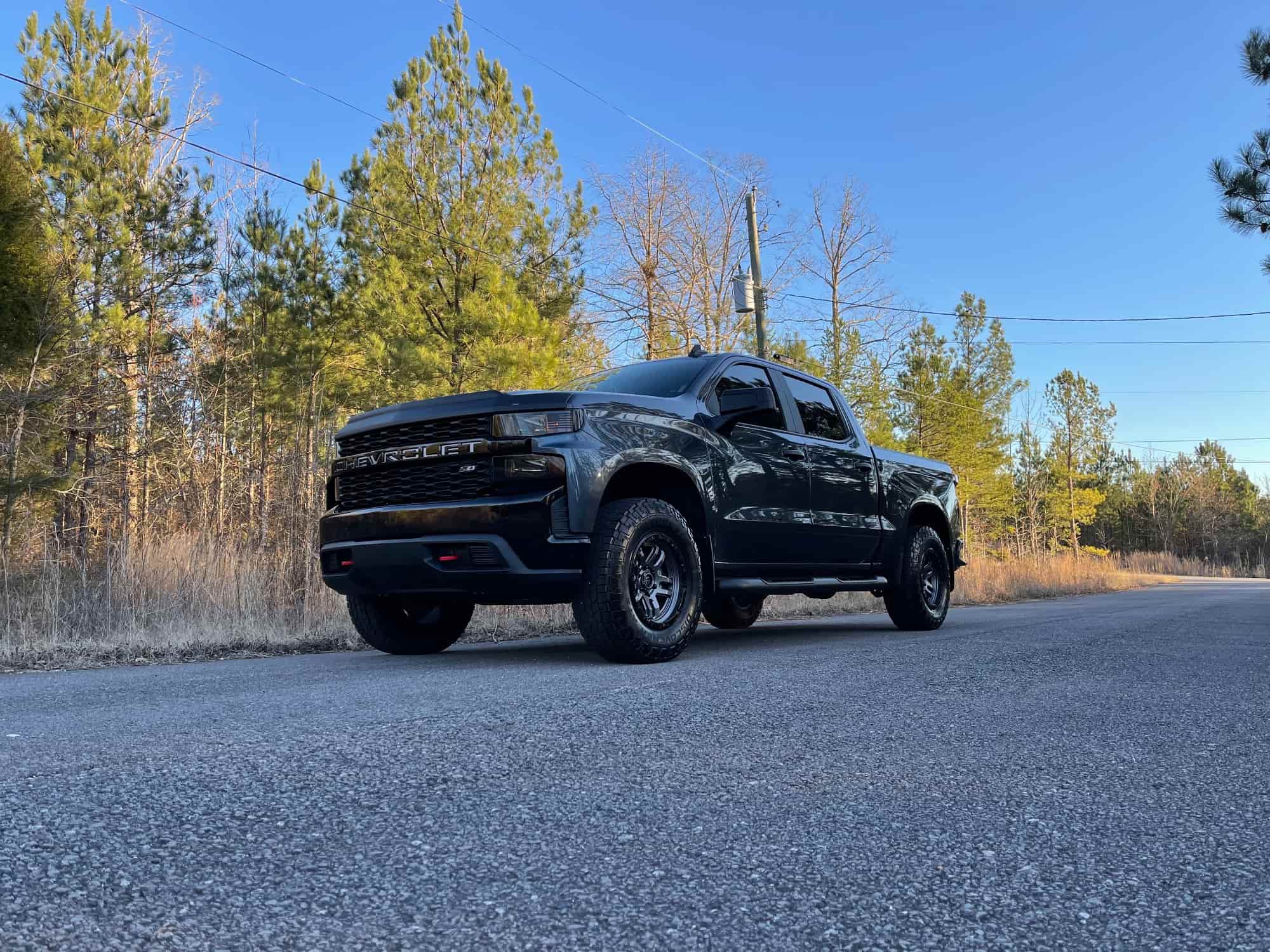 Just like the F-series from Ford, the Silverado has also faced issues over the years including transmission failures/problems like hard shifts, clunking gears, and acceleration problems, as well as problems with burning oil, engine knock (specifically with 2004 Chevys), and sound system failures.

Ram, formally known as Dodge Ram, is another truck company that has a fairly decent market share in the truck industry. Notorious for the large, muscled body style, the 1500 and 2500 have served as the ideal daily driver and working truck. 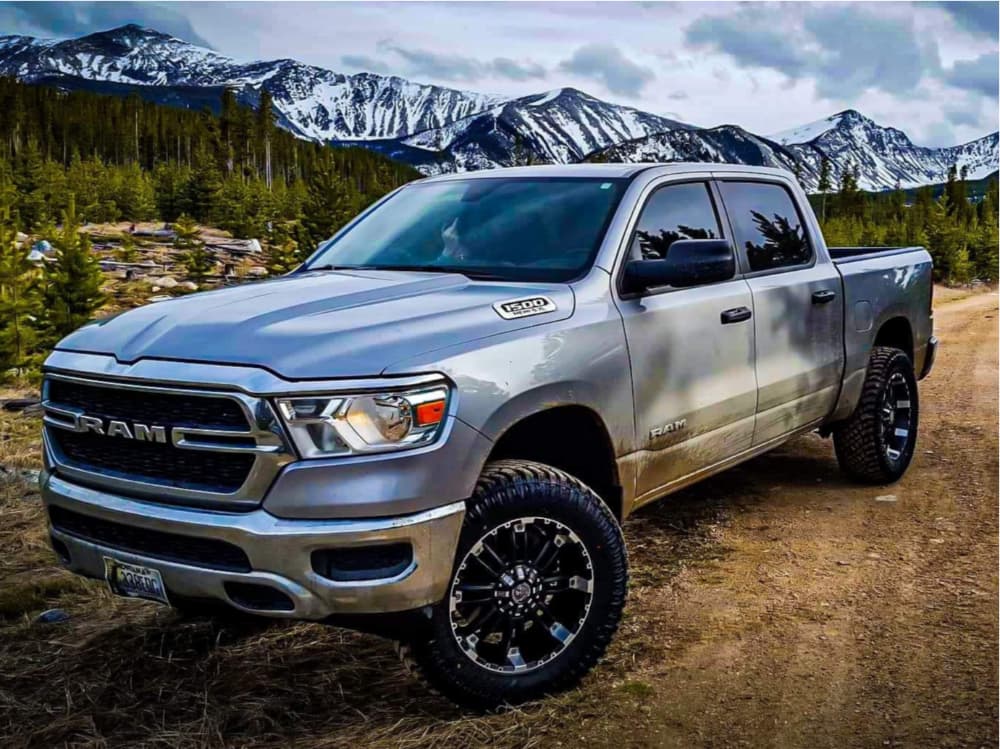 The mentality behind the Ram is similar to those of the Silverado and F-series trucks; it's for the hard-working American who isn't afraid to get their hands dirty; If your hands aren't all callused up, you're not working hard enough. That sounds about right. 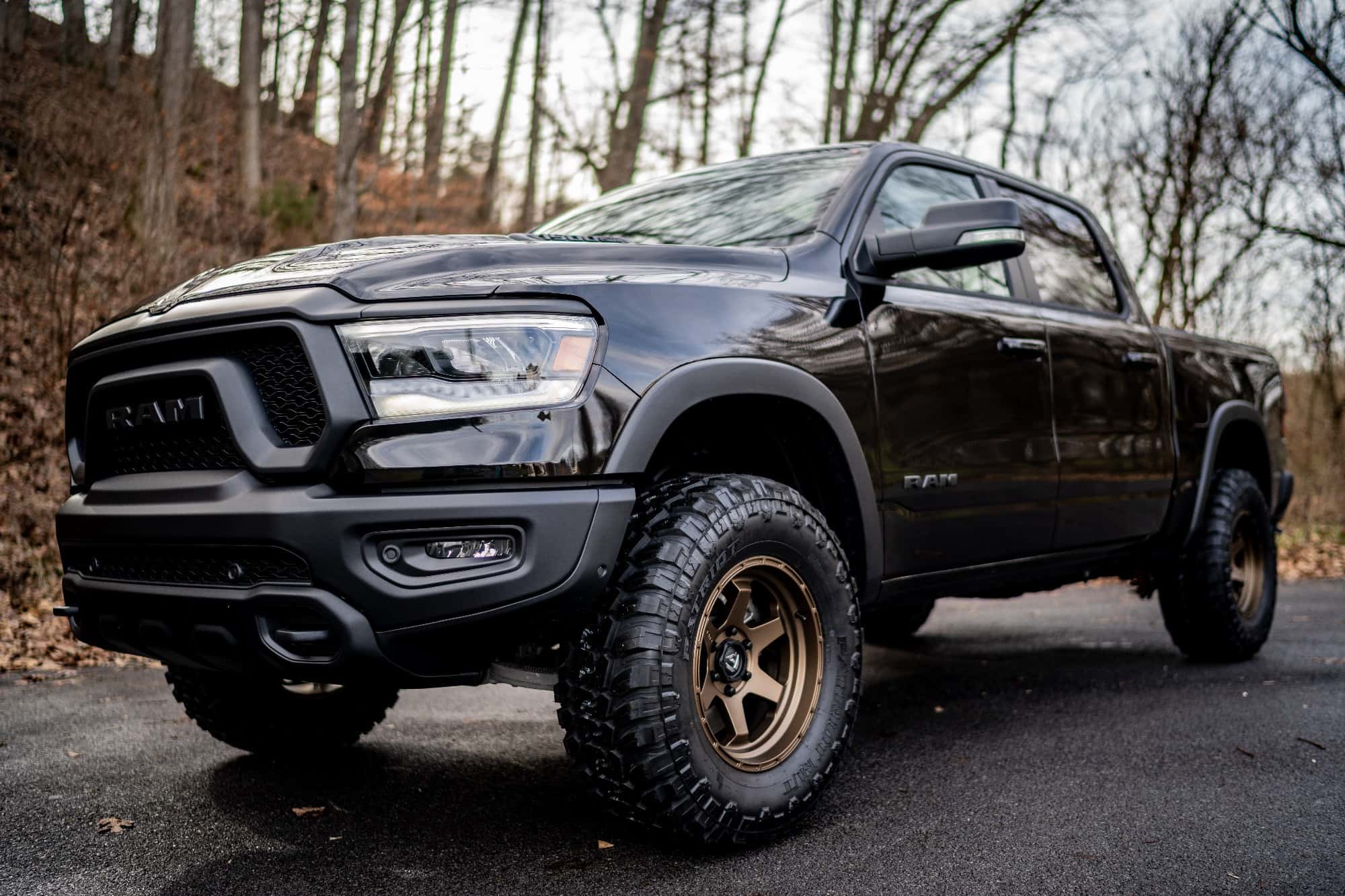 The new Ram is offered in a few trim levels like the Limited, Limited Longhorn, Rebel, Laramie, Big Horn, and Tradesman. The Laramie is definitely one of the more popular trim levels due to its reliable and powerful engine, a 5.7L V8 Hemi mated to an 8-speed automatic transmission. The Ram Laramie has 395 ponies under the hood, 410lb-ft of torque, and a max towing capacity of 12,750lbs, with 33 highway MPG. 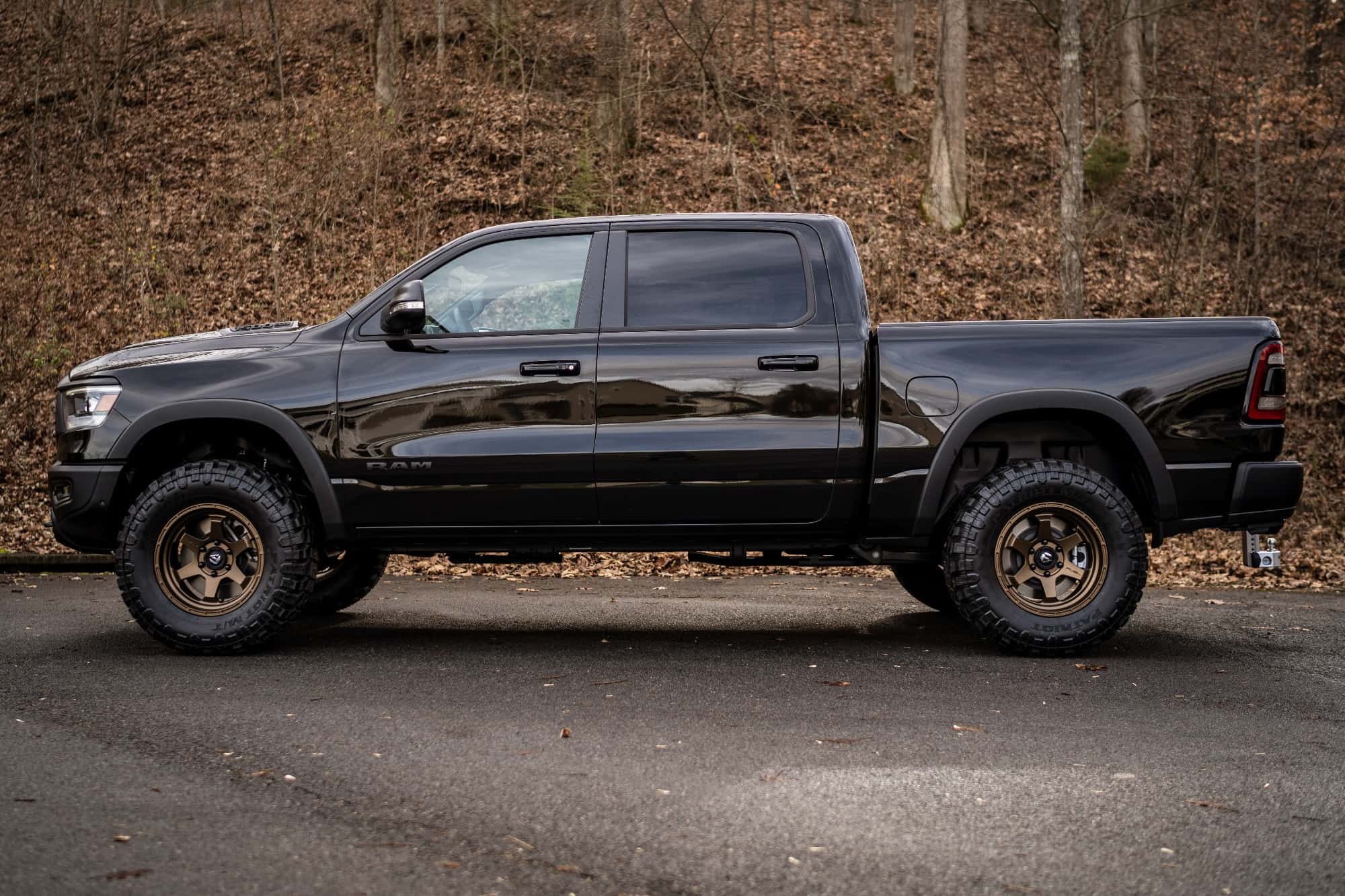 While still holding true to their roots, Ram has started to change the game with their emphasis on luxurious elements throughout the interior that have daily drivers all excited.  This has begun to set them apart from trucks like the F-150 and the Silverado. 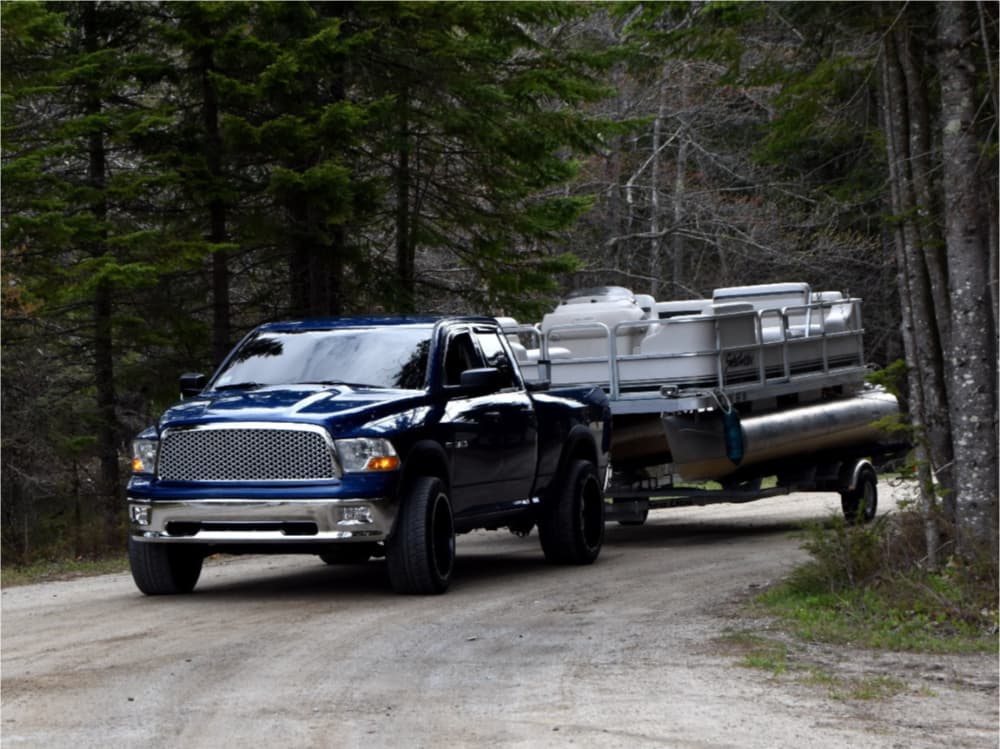 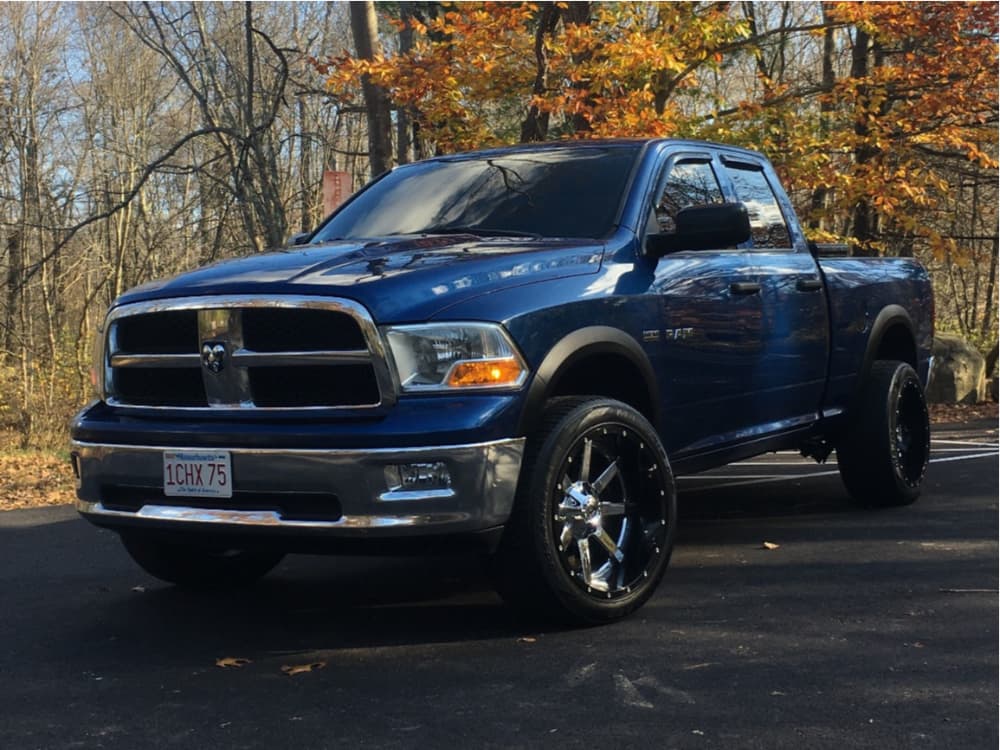 Toyota has often been forgotten about or been last on the list for people when it comes to light trucks; this blog post proves that, but we also love the Tacoma.

READ: WHAT FITS MY TOYOTA TACOMA? 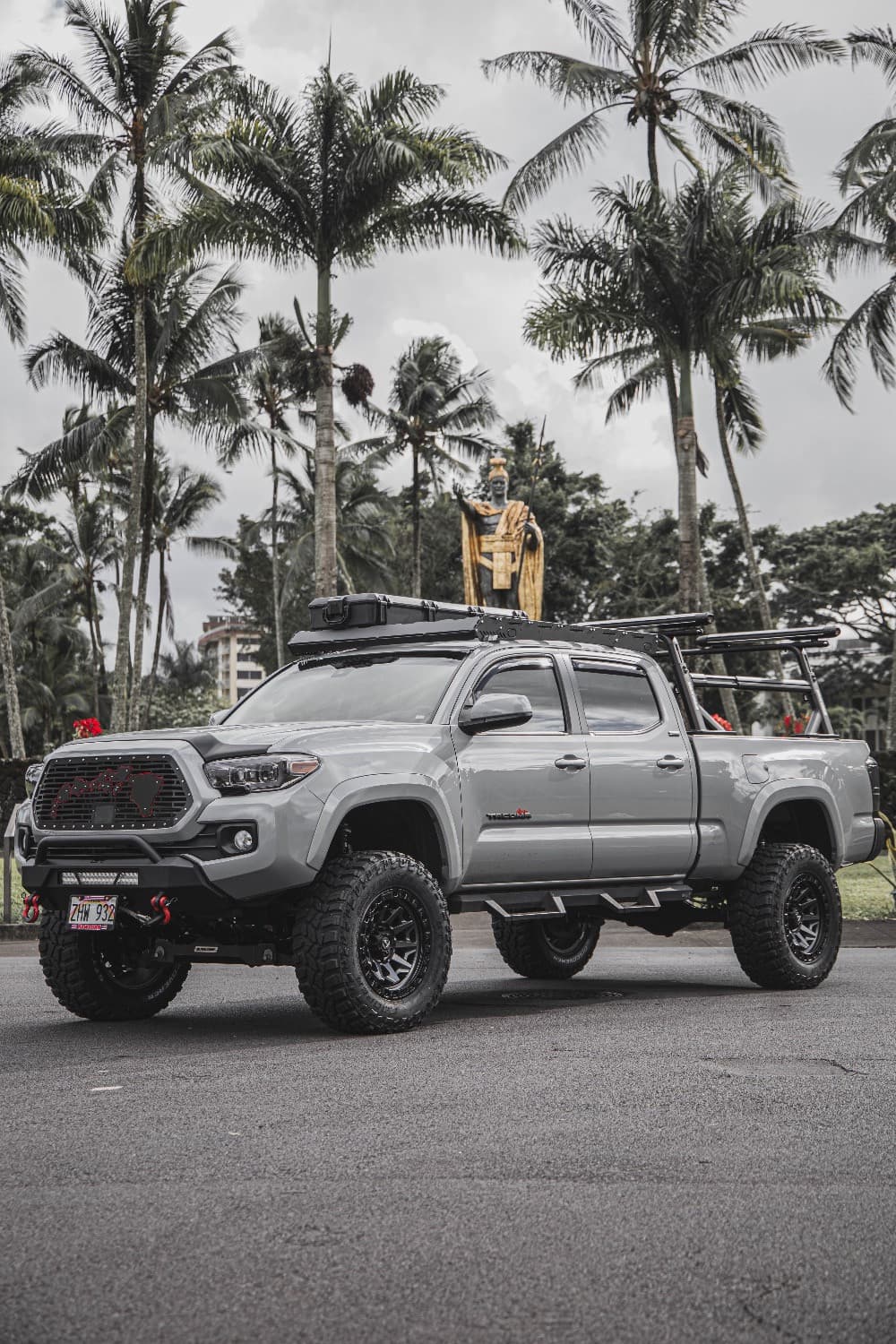 Toyota vehicles have always had a solid reputation due to their reliability, simplicity,  looks, and overall build quality. The Tundra and Tacoma are great examples of this, but everyone's been too busy paying attention to Ford and Chevy trucks.

That isn't to say these trucks don't have a strong community surrounding them because if you know what brand loyalty means to Toyota people, you understand. 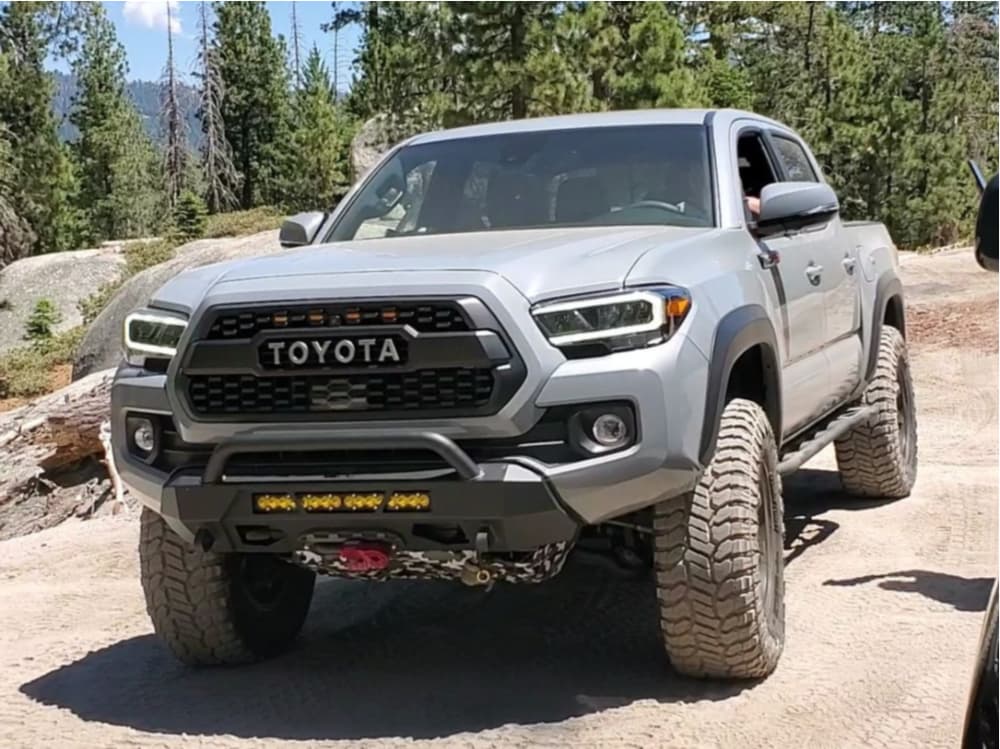 The Tacoma especially has always been a fan favorite for outdoor and adventure enthusiasts. Most Tacoma owners are either hardcore outdoor and off-road enthusiasts or strictly daily drivers; there's no in-between. 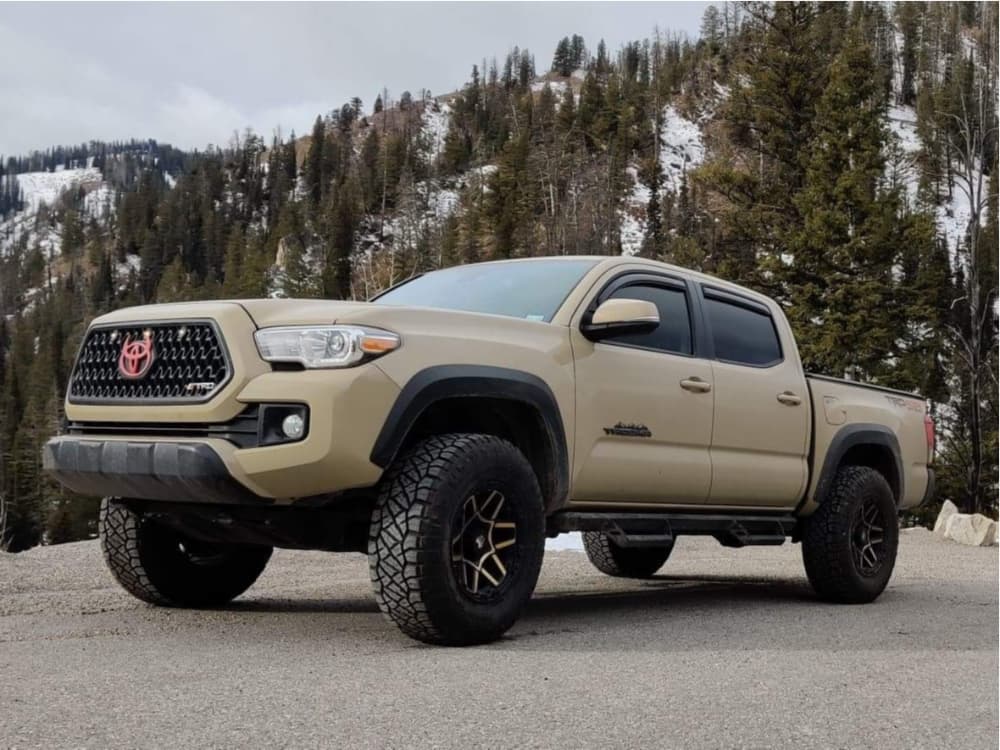 Toyota has an emphasis on the usability and functionality of the Tacoma specifically for off-roading which is why it's such a popular truck for the activity. The Tacoma is powered by a 3.5L V6 engine mated to an optional 6-speed manual, which is unheard of in a new mid-sized truck, 6,800lb towing capacity getting around 20 city / 23 highway MPG. 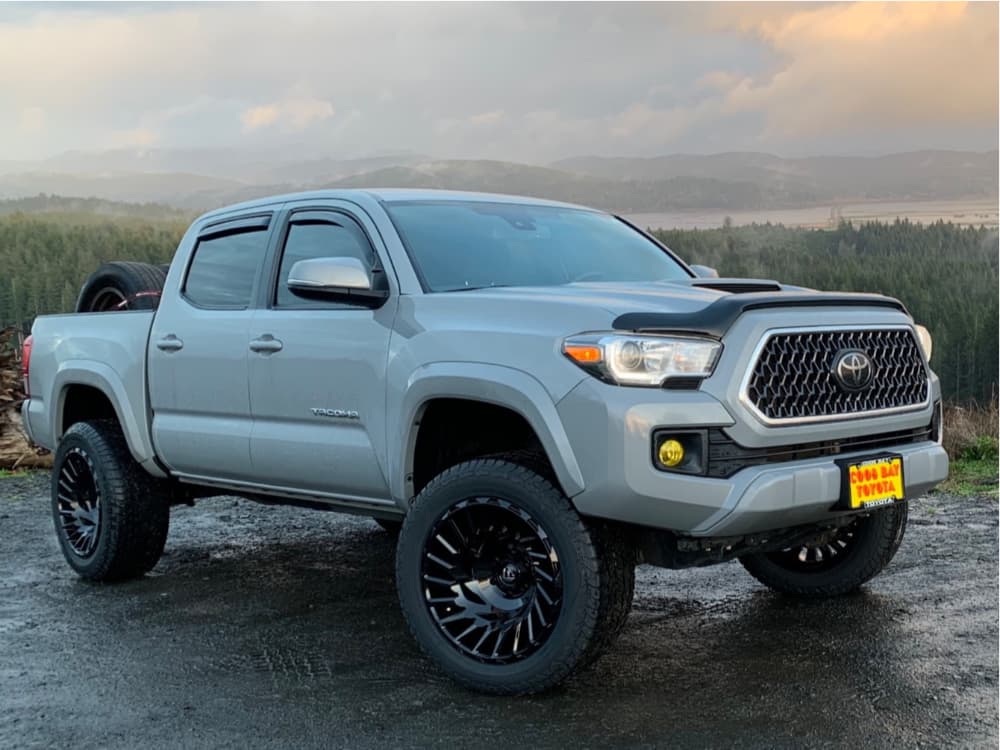 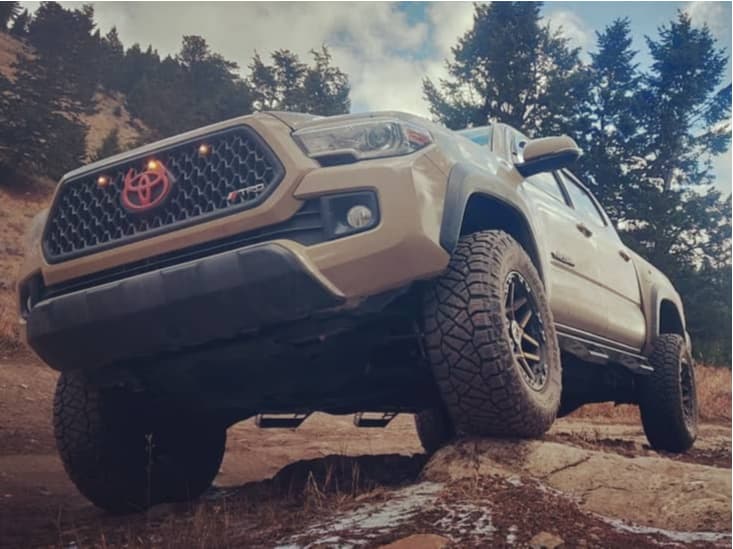 The exterior of the Tacoma certainly looks like it's meant to be a trusted companion during off-road adventurers. Its rugged look and muscular front end with the large, aggressive grille fits the ideal trail traveling and rock crawling truck. 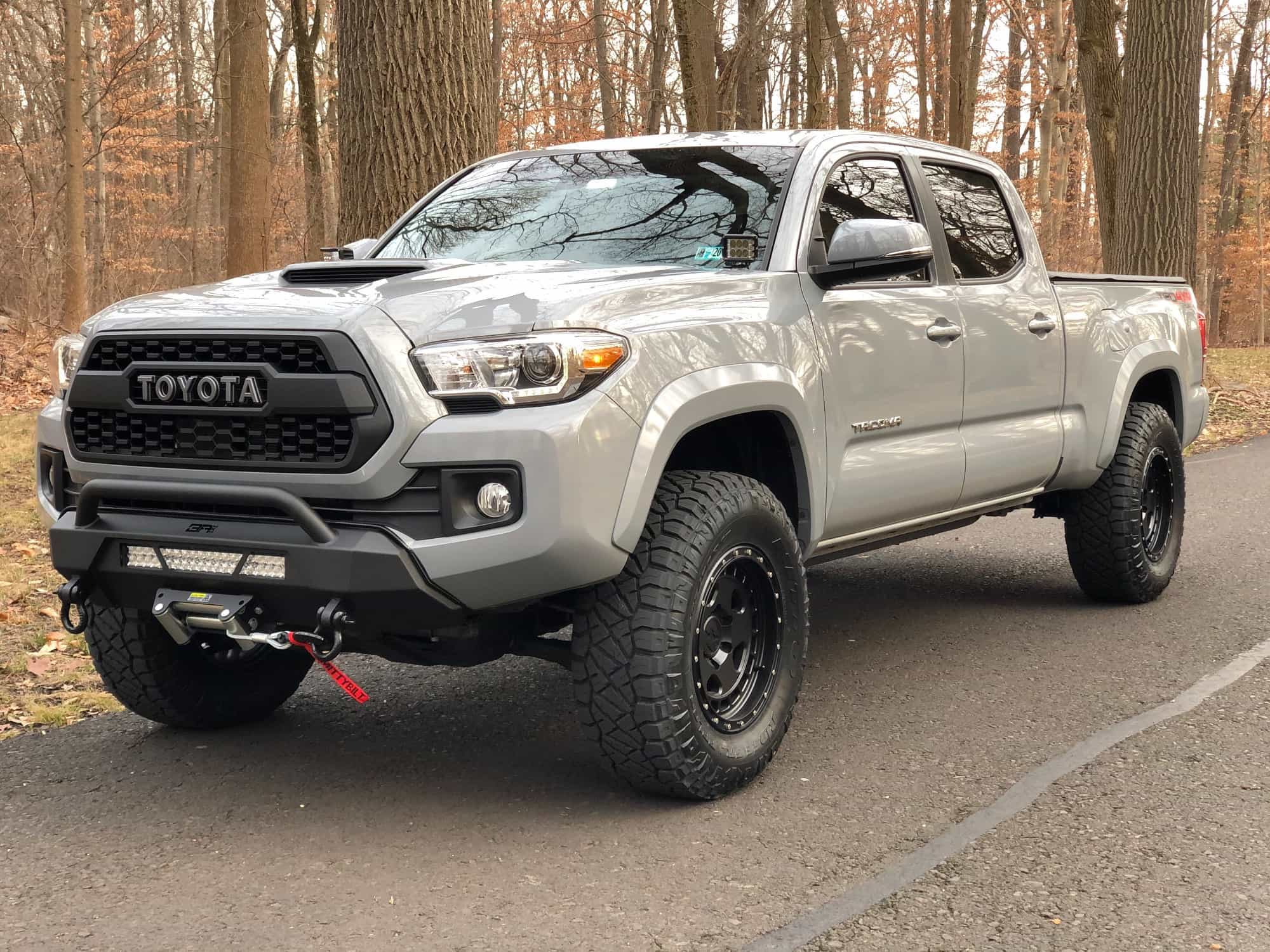 Common Tacoma issues over the years have been lower ball joint problems, cracked front light lenses, and issues with the automatic transmissions not shifting properly. 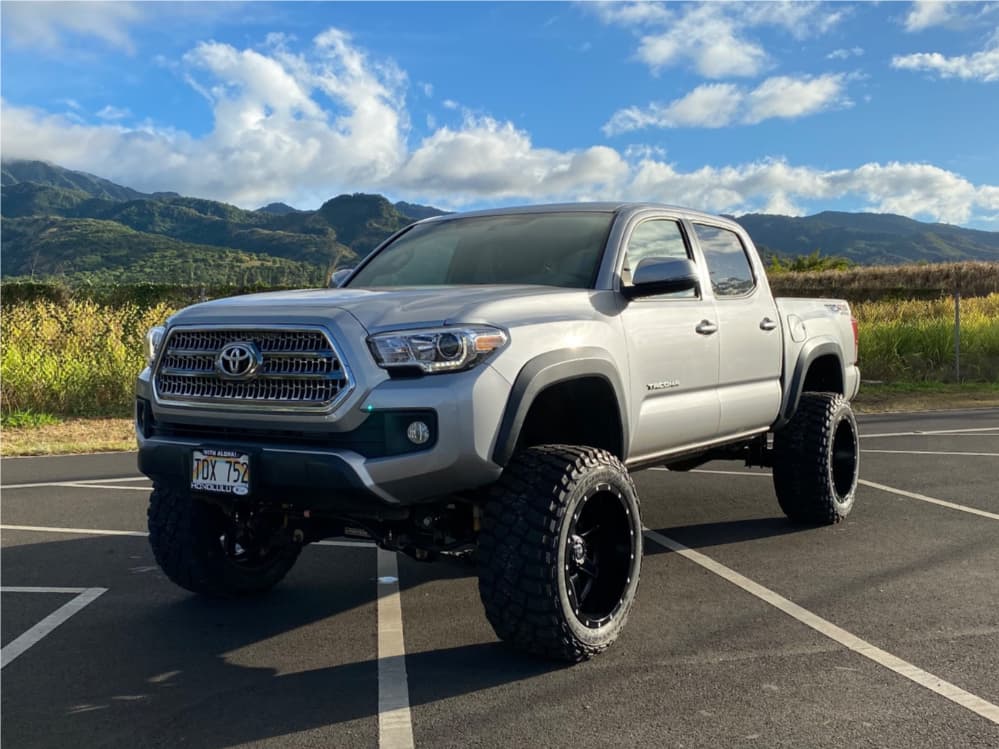 Come on, you cheated. You're eager to find out what our conclusion is and I don't blame you. This is a hot and heavy topic. Here's what we think based on the following categories: Fuel Economy, Price, Power/Towing Capacity, and Looks. 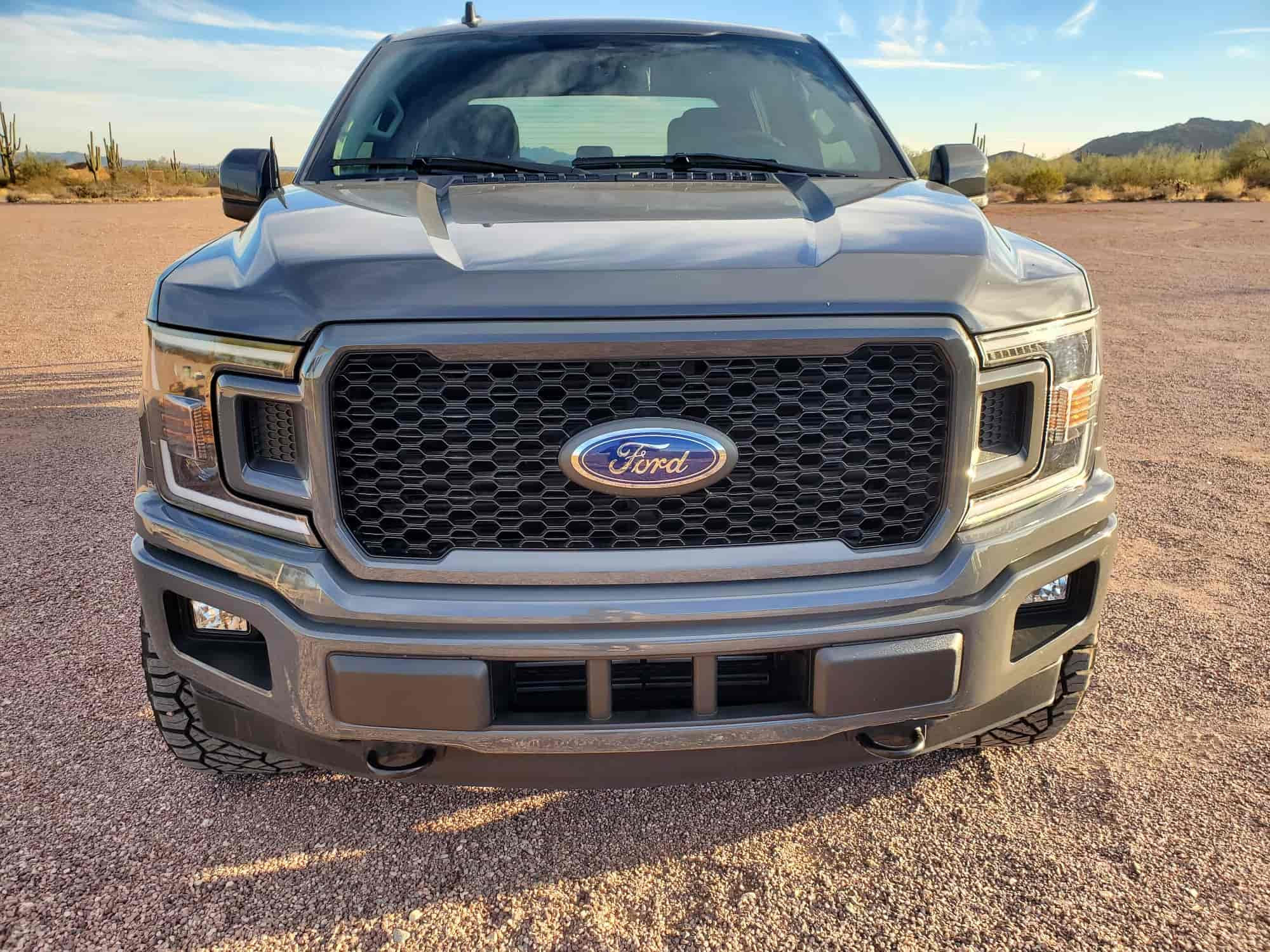 Power/Towing Capacity: Ford F-150s | The 14,000lb towing capacity and 430 horsepower are hard to beat. Silverados and Rams come pretty close, but Ford takes this one.

Looks: Ford F-150 and Toyota Tacoma | Ford takes this one home too, but we're giving this category to Toyota and the Tacoma too. The Silverado and F-150 share a lot of interiors and exterior design features so this was pretty close, but there's a lot of hype around the F-150, especially the Raptor. The Tundra has always looked really great especially with the TRD package features.

Price: Toyota Tacoma | The new Tacoma's start at $26,400, but the older Tacomas are becoming overpriced by private party sellers

SHOP WHEELS AND TIRES FOR YOUR TRUCK 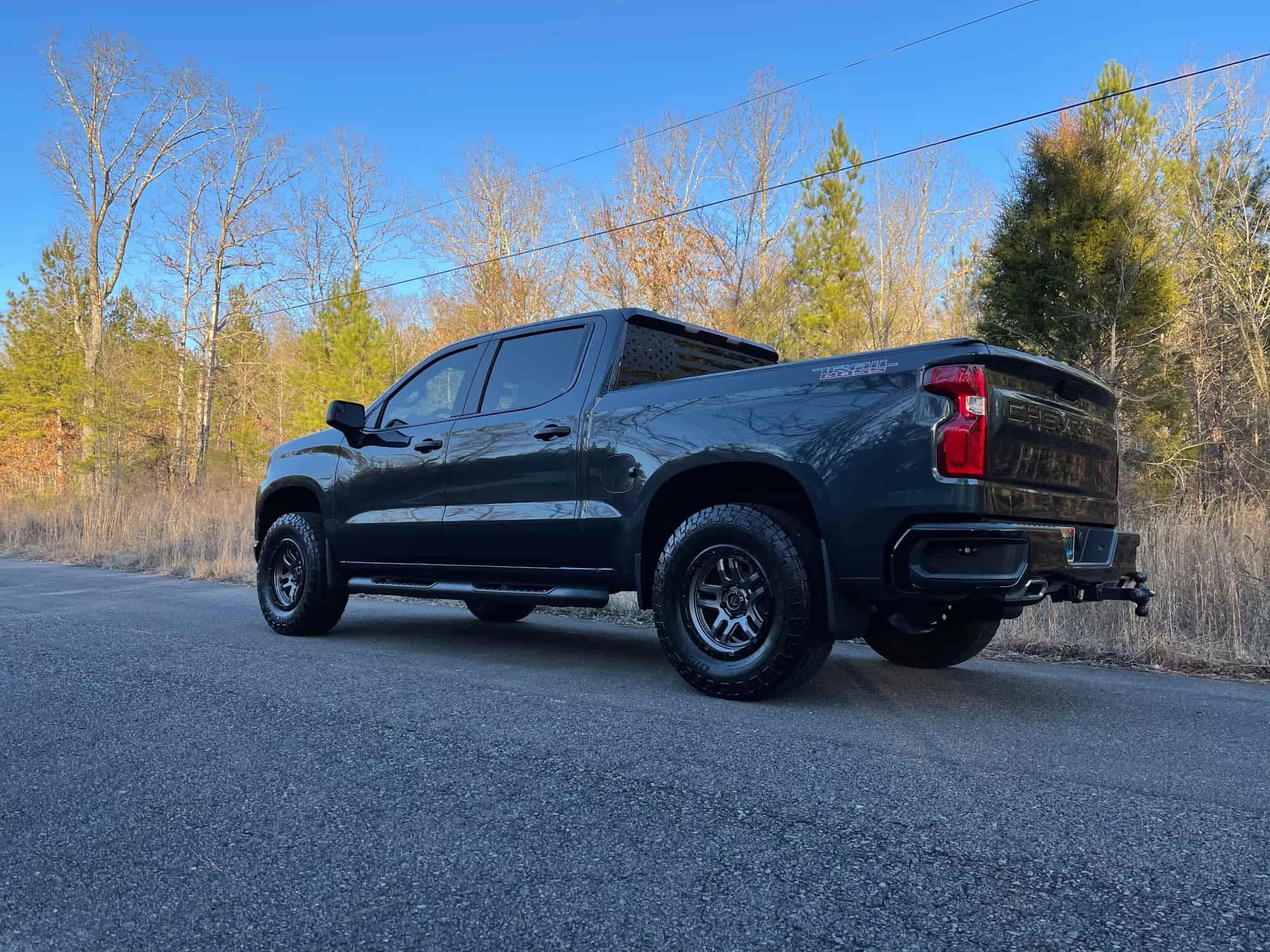 Whats the difference between a lift kit and a leveling kit? 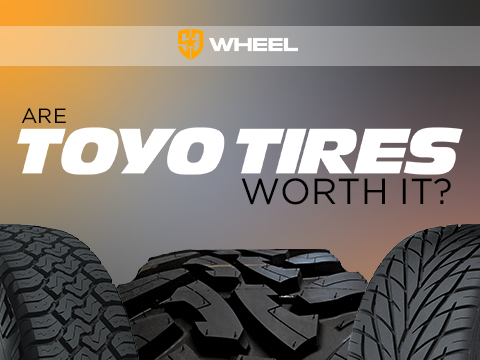 Are Toyo Tires Worth it? 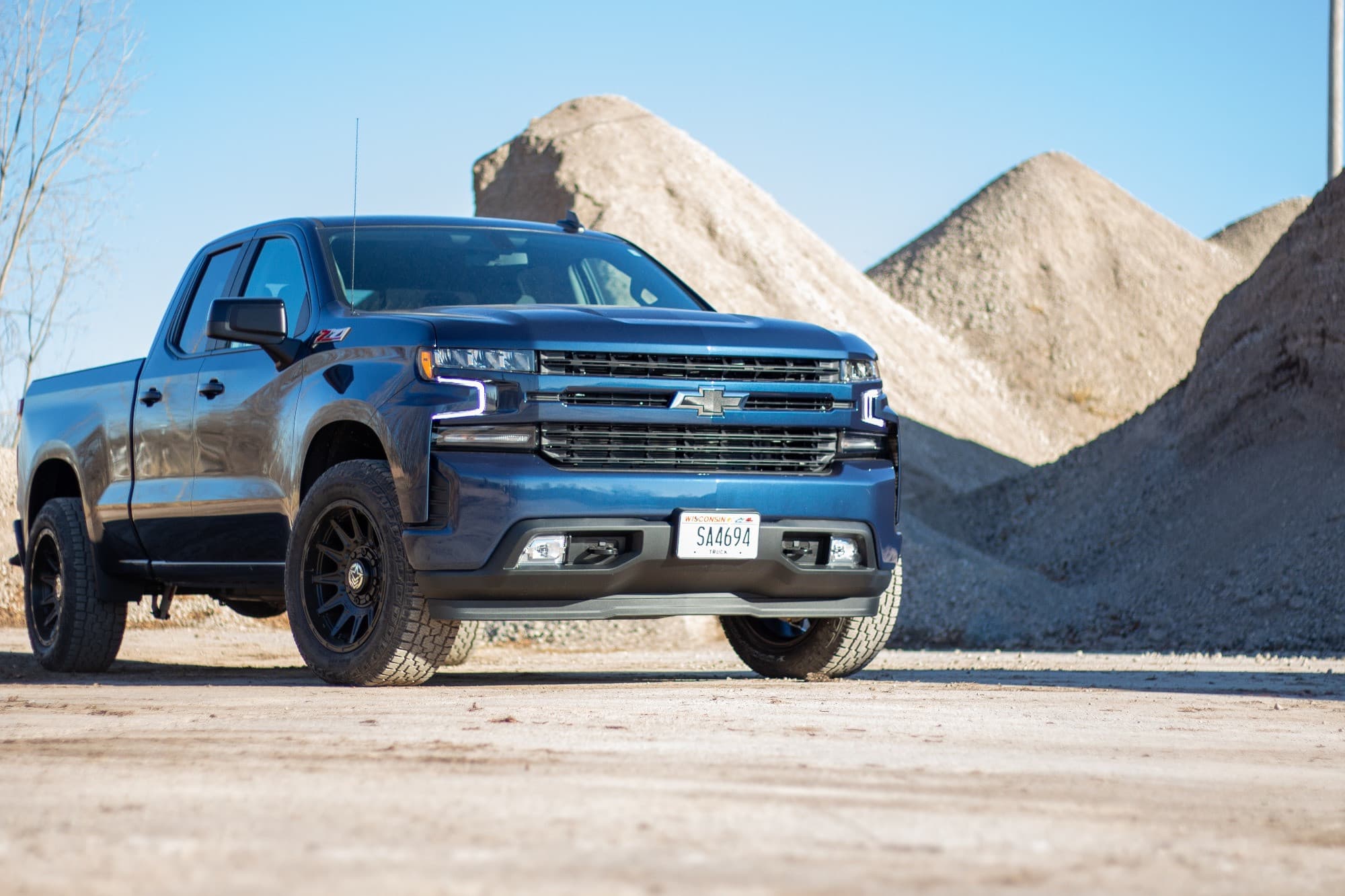 Top 10 Wheel and Tire Packages for Your Truck